Welcome back to Tenacious Genealogy! This post is a little bit later than when I wanted to originally post it, but it is still a fascinating and appropriate topic, given some of the historical recipes I’ve posted before. About  two weeks ago (March 28th), Hannah Glasse’s 310th birthday was commemorated with a Google Doodle.

This drew my curiosity and so I looked up who Hannah Glasse was. Come to find out, she was the original Julia Child and Martha Stewart rolled into one.

Her first book – The Art of Cookery, made Plain and Easy was an instant best seller in England and North America after its publication in 1747 and many future ‘cookery book’ authors (such as Amelia Simmons) took her as their inspiration.

That said, I thought it would be interesting to show off 5 fun facts about Hannah Glasse – the forerunner of the modern-day cookbook author. 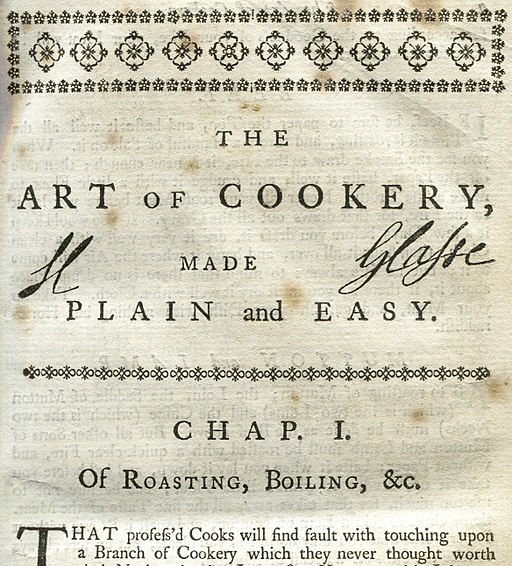 1) She penned the first popular cookbook in England.

Before the publication of ‘The Art of Cookery’, there had been several cookbooks published in England and in Europe. However, none of them were as instantly successful or as enduring as Hannah Glasse’s book. Published in 1747, it became a massive success in the English speaking market and during the late 18th century and early 19th century, Hannah Glasse was a household name all over Great Britain, its colonies, and North America.

It continued to be popular into the 1840s, with a popularity that continued even after the American Revolution. While King George was not well loved by many Americans, Hannah Glasse was. An American edition of her cookbook was published in 1805 and men such as Benjamin Franklin, George Washington, and Thomas Jefferson were known to have well-used copies of her cookbook in their respective households well before that.

2) Despite her book, The Art of Cookery, made Plain and Easy, being a commercial bestseller, she still dealt with financial issues.

Unfortunately, while ‘The Art of Cookery‘ made Hannah Glasse a household name, it did not make her a lot of money – or at least keep her from financial woes. This may have been for a variety of reasons. Whatever they were, by 1754 Hannah Glasse was bankrupt. While the stock from her day to day dressmaking business was not auctioned off to pay her bills, she was forced to auction off the copyright for ‘The Art of Cookery‘ by the end of that year. While this allowed for the payment of present bills, by 1757, Hannah Glasse was again in debt, this time being forced to live in first the Marshalsea Debtors’ Prison and then Fleet Prison. That said, that only lasted for about 6 months and by the end of 1757, Hannah was again free, having written another book.

3) Hannah Glasse is known to have written three books on cooking and household management.

While ‘The Art of Cookery‘ was Hannah Glasse’s first and most commercially popular book, she also ended up writing at least two other cooking and household management books that we know of. In 1757 Hannah Glasse published ‘The Servants Directory‘ – a book on managing servants and one’s household. While it was popular, it did not have the staying power or financial success of ‘The Art of Cookery‘. Hannah’s last book, ‘The Compleat Confectioner‘  – which dabbled in both the subjects of food preparation/cooking and household management was published in 1760 and also did moderately well.

4) Because Hannah Glasse did not note herself as the author in ‘The Art of Cookery’, it wasn’t until 1938 that it was rightfully attributed to her.

When ‘The Art of Cookery’ was published in 1747, the book itself noted that it was written ‘By a Lady’ but did not note a specific author. Because of this, there were many theories as to who was the actual author. In fact, some contemporary authors of Hannah’s believed the book to actually be the work of a man. In a biography about Samuel Johnson, he is stated to have said (about Hannah Glasse’s book), ‘Women can spin very well, but they cannot make a good book of cookery.’ In 1938, the historian Madeleine Hope Dodds wrote an academic paper detailing why Hannah Glasse was definitely the author of ‘The Art of Cookery‘. Since then, there has been little debate as to whether or not Hannah Glasse was the author.

5) Because of the popularity of ‘The Art of Cookery’, she has been noted in recent years, by many titles including ‘the first domestic goddess’ and ‘the mother of the modern dinner party’.

In recent years, as people have delved more deeply into historical ‘cookery’, Hannah Glasse and ‘The Art of Cookery‘ have seen a resurgence in popularity. Not so much in how to cook, as much as seeing where we have been food wise. Especially in Britain, there have been documentaries about her, new editions and reprints of ‘The Art of Cookery‘ and a few famous, modern-day chefs (and culinary historians) have emphasized her prominence in the world of cookbooks and English cuisine.

Comments or questions about Hannah Glasse or ‘The Art of Cookery‘? Let me know down below! And if you like what you’ve been seeing here on Tenacious Genealogy – please subscribe to our email list. Not only will you stay up to date with the latest blog posts, but you’ll also get access to freebies such as ’10 Tips for Starting Your Genealogy’ and other fun ‘subscriber only’ items!

Looking for an easy recipe that people made during

Another historical recipe! #baltimorepudding is mo

Here are a handful of genealogy conferences planne